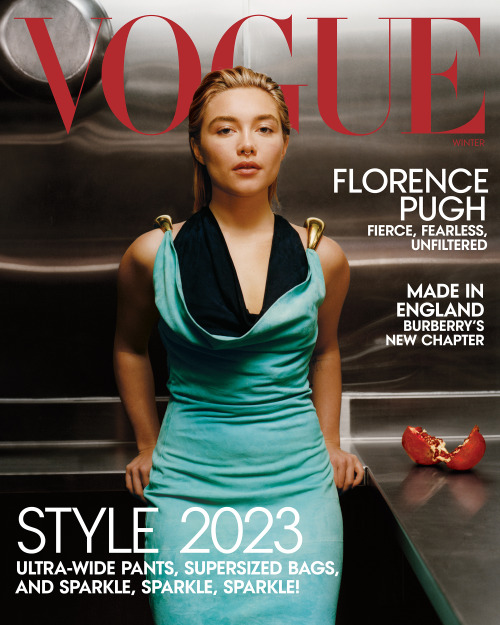 Those closest to #FlorencePugh will be the first to tell you: Even after an extraordinary rise through a series of complicated, layered rolesâearning her comparisons to greats like Meryl Streep and Kate WinsletâPugh may just be the most grounded, radically self-aware superstar in Hollywood.Â Â

For Vogueâs Winter issue, the 26-year-old star reflects on withstanding (and defying) the glare of public attention; her slate of recent and upcoming projects with SebastiÃ¡n Lelio, Zach Braff, and Christopher Nolan; and the utter unpredictability of her kind of Hollywood success.

Seven-time Grammy winner #BillieEilish has set her sights on a greater goal: saving the planet. For Vogueâs January digital cover story and video, #BillieEilish invited a group of young climate activists and organizers to join her for a day of conversation about the future of the planetâto be filmed by Academy Award-nominated writer-director Mike Mills. The group wore sustainable fashion for the mini-summitâwith Eilish in #Balmainâand they talked about community, justice, the precariousness of the present, and the persistence of a kind of radical hope for a better tomorrow.Â 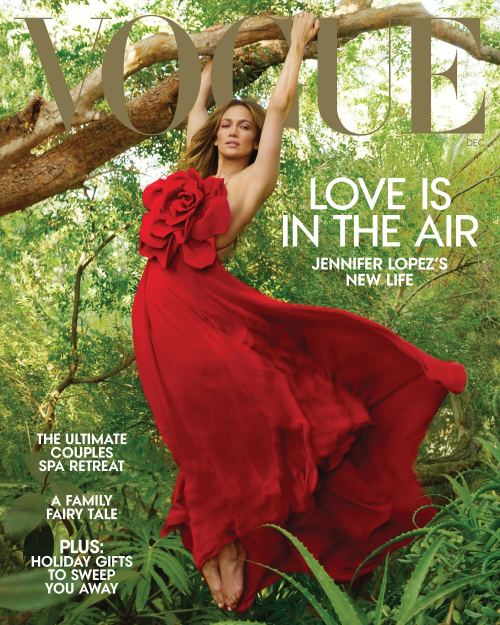 For Vogueâs December issue, #JenniferLopez talks about married life, parenting, politics, why âMrs. Affleckâ felt romantic, and how sheâs been recording a highly personal new album, her first in nearly a decadeââa culmination of who I am as a person and an artist,â she says.

For Vogueâs November issue, Michaela Coel takes us on a personal... 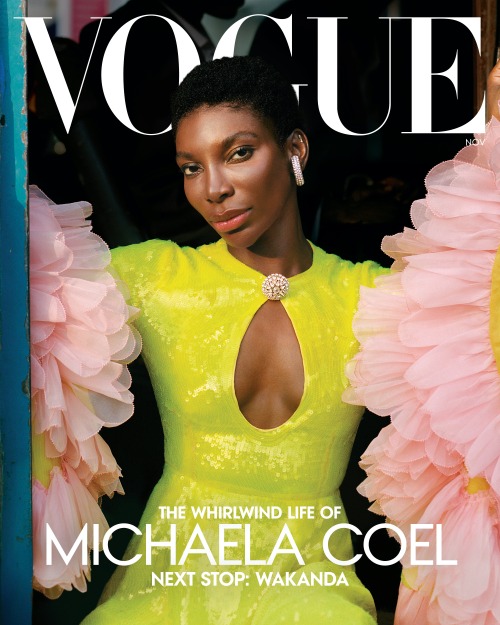 For Vogueâs November issue, Michaela Coel takes us on a personal tour of her ancestral homeâAccra, Ghanaâand talks openly about love, life, representation, politics, and what matters most to her about living a creative life on her own terms.Read the full story:Â http://vogue.cm/o3tG0lPÂ 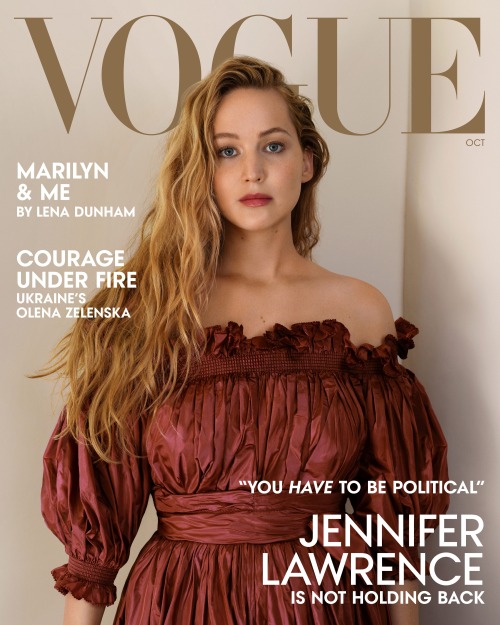 Having a baby cracked Jennifer Lawrenceâs world wide open. âMy heart has stretched to a capacity that I didnât know about.â And her new film, Causeway, about war and trauma and making connections with others, is a highly personal story, three years in the making. But whatâs really on Lawrenceâs mind is politics. âI canât fuck with people who arenât political anymore,â she says in a no-holdâs-barred interview for Vogueâs October issue. Lawrence unleashes on the end of Roe v. Wade, on guns, on the need for climate actionâand opens up about the divisions within her own extended family, and on the importance, above all, of voting this fall. 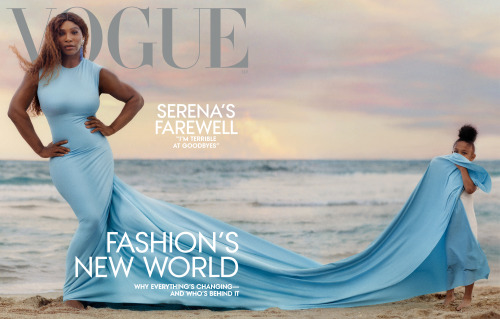 âIâm here to tell you that Iâm evolving away from tennis, toward other things that are important to me,â #serenawilliams says. In her own words, for Vogueâs September issue, Serena opens up about âthe hardest thing that I could ever imagine,â while offering a window into the bright future sheâs building.Â 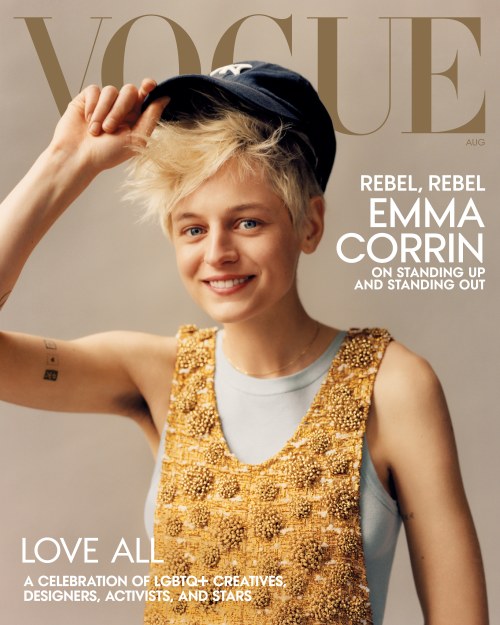 #EmmaCorrin first rose to fame by portraying a genteel, distinctly British vision of femininity on #TheCrown, even as they discarded that same ideal of femininity in their own life.

With two blockbuster films on the horizon, Emma Corrin opens up for Vogueâs August issue about fluidity, fun, and dressing up to stand out. 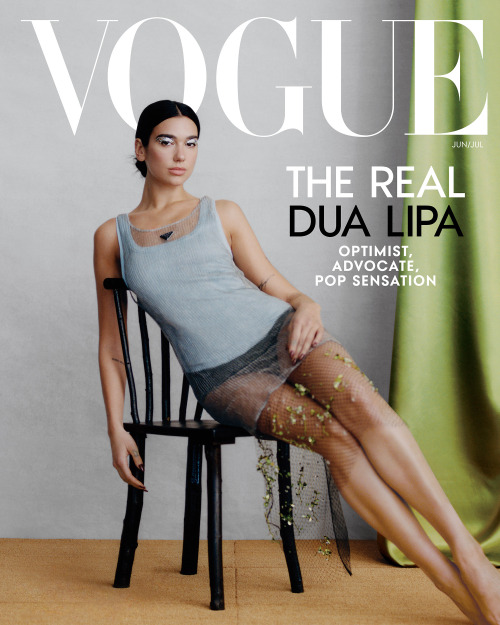 Introducing the real #DuaLipa. âItâs like Iâm coming into my power and not afraid to talk about things,â she says. âItâs about understanding what I want.â And what Dua wants right now is Dua.

For Vogueâs June/July issue, Dua opens up about her new chapterâall while revealing the pieces of her past that remain close to her heart.

Rihanna is Vogue Magazineâs May Cover Star!Â âNone of the dials... 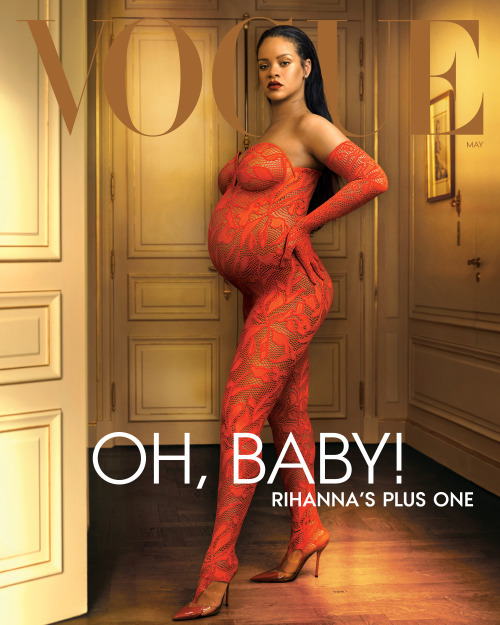 âNone of the dials are turned down.â After announcing her pregnancy, many expected Rihanna to slow down. But the musician, billionaire entrepreneur, and maternity style pioneer is firing on all cylinders. âAt first I expected some magical change, but really I remain who I am.â

For Vogueâs May issue, Rihanna opens up about fashion, romance, and what itâs like to carry the bump seen around the world. Plus, a small update on that long-awaited record. 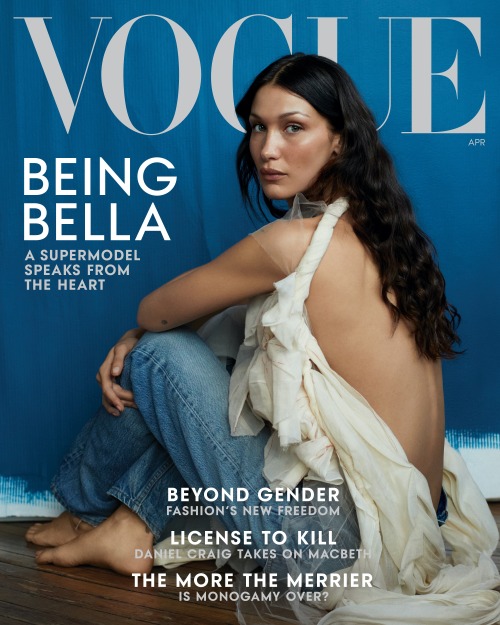 âFashion can make you or break you. And if it makes you, you have to make a conscious effort every day for it not to break you.â Bella Hadid is a bona fide supermodel in the full flush of her fame, but it is who she is on the inside, when the cameras are down, that sheâs ready to reveal to the world.

For Vogueâs April issue, Hadid gets candid about mental health, happiness, health struggles, and everything in between. 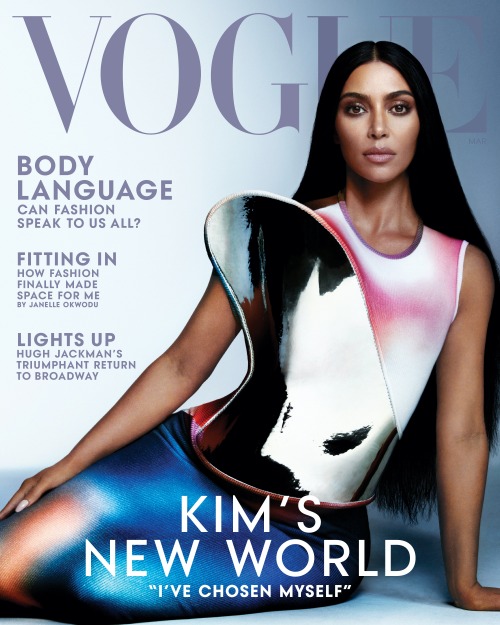 âMy 40s are about being Team Me.â Itâs Kim Kardashian Westâs new world, and sheâs choosing herself. For Vogueâs March issue, take a look inside Kimâs universe: motherhood, divorce, and a new crop of changesâboth small and seismicâthat usher in a new era for the style icon. 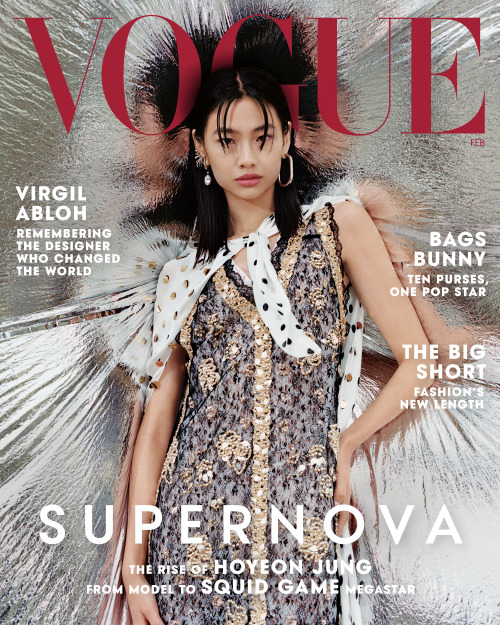 For Vogueâs February issue, take an unprecedented step inside the whirlwind with the heart-on-her-sleeve megastar, ever since Squid Game turned the model-turned-actor into an instant phenomenon. 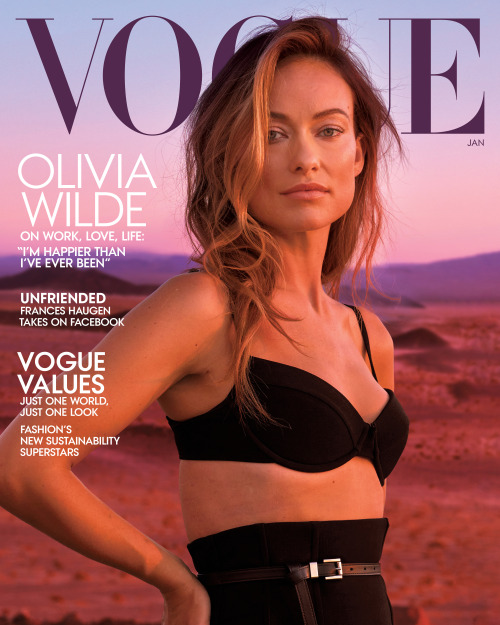 For Vogueâs January issue, Wilde opens up about motherhood, work, love, and everything in between, offering a look at âwhatâs real, and what you love, and who you love,â according to her. 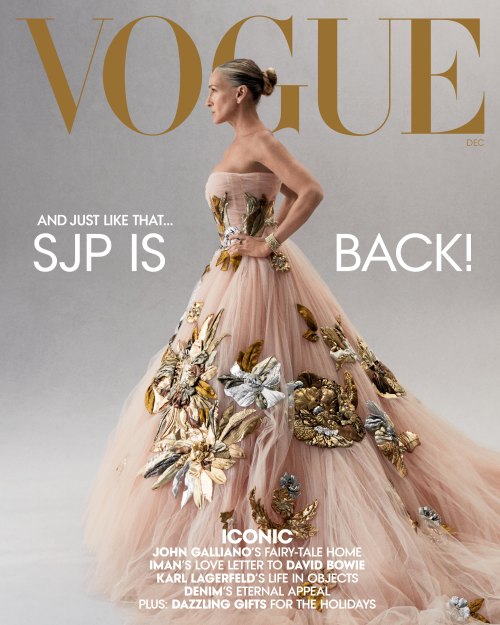 For Vogueâs December issue, Parker opens up about returning to the SATC universe in the era of social media, reprising the role of Carrie Bradshaw, and celebrating women as they areâat any age. 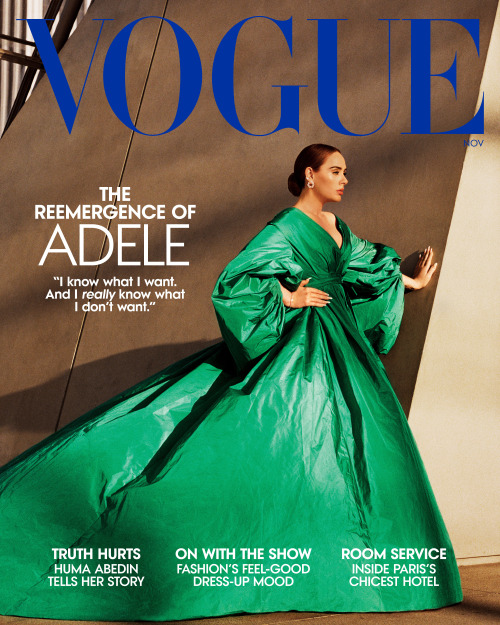 For Vogueâs November issue, Adele opens up about motherhood, anxiety, separation and divorceâand how sheâs getting ready to be famous again.

Vogueâs October issue stars Lorde!The star opens up about her... 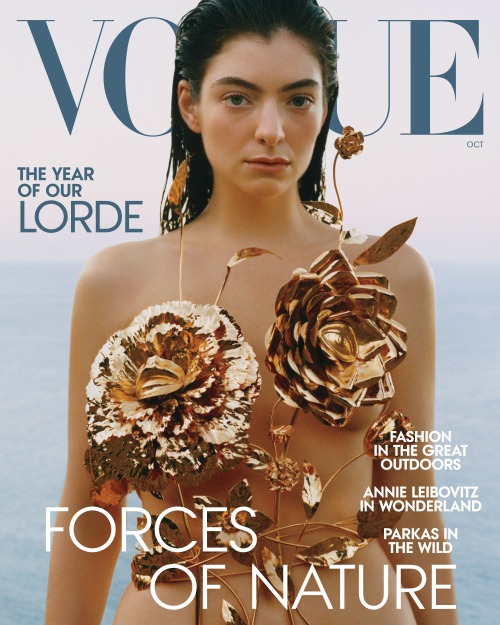 The star opens up about her blissed-out comeback with her third album, Solar Power, a celebration of the natural word, a meditation on the hazards of a plugged-in existence, and an update on her life since our last glimpse of it. 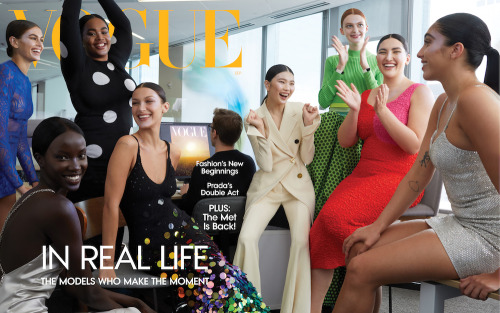 For this issue, eight American models representing a new generation in fashion sat down with Vogue to reflect on a changing industry.

Read how these faces represent a new world in fashion:Â https://www.vogue.com/article/september-issue-2021

âDuring the campaign, I felt so much anxiety from people; they... 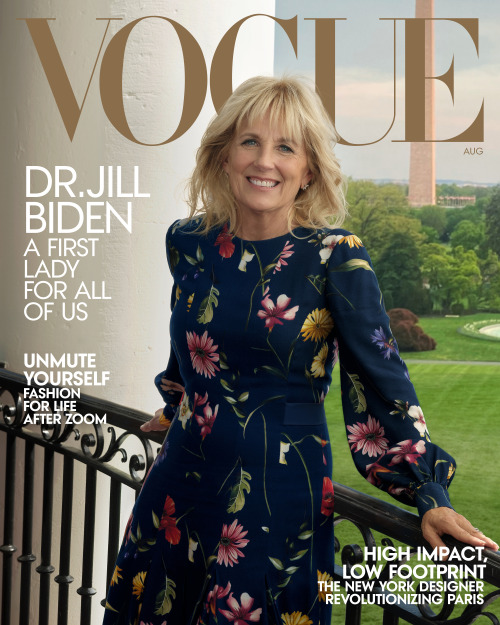 âDuring the campaign, I felt so much anxiety from people; they were scared,â Dr. Jill Biden reflects. âWhen I travel around the country now, I feel as though people can breathe again.â

For our August cover story, Dr. Biden opens up on the hardworking, heart-on-her-sleeve, everywhere-at-once FLOTUS that America needs now.Â

Kaia Gerber stars on the cover of our June/July issue!Who is... 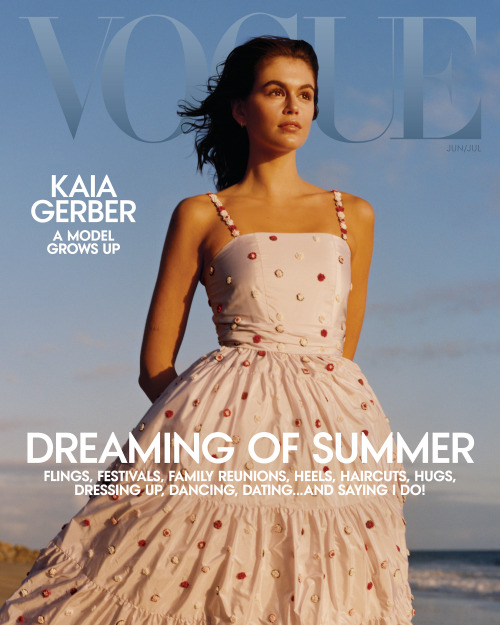 Kaia Gerber stars on the cover of our June/July issue!

Who is Kaia Gerber, really? The 19 year oldâone of the most successful models in the worldâis thinking hard about that very question, and beginning to come up with some answers. Read our full profile: https://www.vogue.com/article/kaia-gerber-cover-june-july-2021

Amanda Gorman is our May cover star!Â Poet, activist, optimist,... 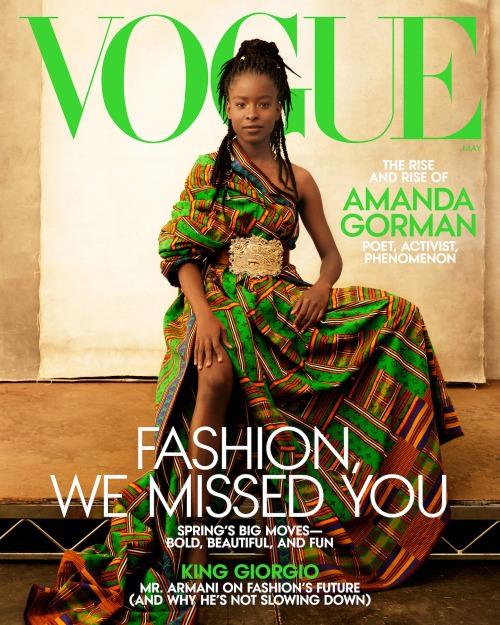 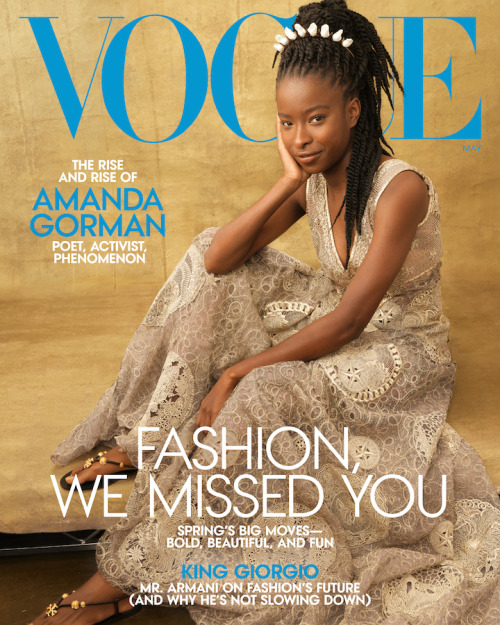 Amanda Gorman is our May cover star!Â

Poet, activist, optimist, style iconâ@amandascgorman has become so much more than a literary star. âIt took so much labor, not only on behalf of me, but also of my family and of my village, to get here,â says @amandascgorman, reflecting back on the long journey of her short life.

Meet the phenomenon in the making: https://www.vogue.com/article/amanda-gorman-cover-may-2021Â

Back To The Top Of The Page